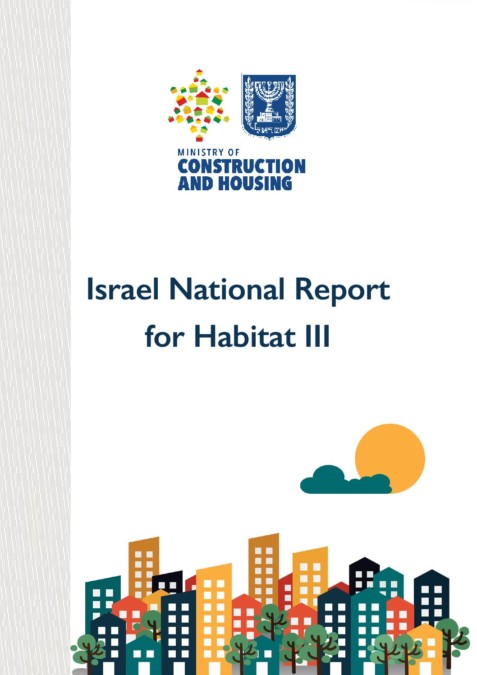 The report presents urban development in Israel between 1996 and the present, covering almost twenty years of rapid growth and signifcant challenges. Israel is one of the most rapidly growing countries in the world, both in population and in GDP. In 1996, 5,157,700 people lived in Israel. By 2016, the population rose to 8,462,000, including over one million new immigrants. Most Israelis, over 90%, live in urban communities, where they have lived for the past twenty and more years. The New Urban Agenda presents an opportunity to embrace cities and create a comprehensive urban vision, utilizing the country’s enormous potential and creativity to ensure “no one is left behind”.

Method for preparing the National Report:
The Ministry of Construction and Housing (MoCH), in coordination with the Israel Planning Administration, the Ministry of Interior, the Ministry of Environmental Protection (MoEP), and other state agencies, is leading Israel’s preparations for Habitat III. This undertaking is organized as a multi-stakeholder process, reﬂecting the varied interests and different voices, needs and understanding of development that form the new Urban Agenda. The Israeli process was a broad initiative, bringing together government, local government, civil society, academia, Parliament and varied professional organizations. In 2015, they established the Israel Urban Forum and together with the Ministry of Construction and Housing, organized the First Convention on Urbanism, in the city of Acre. More than a thousand people attended the convention, taking part in discussion groups, round tables and spontaneous exchange of ideas and know-how. At the convention, MoCH launched the National Urban Committee, a broad-based venture for delineating a new Urban Agenda for Israel. Partners to the venture include representatives of national and local government, alongside representatives of civil, academic and business sectors.