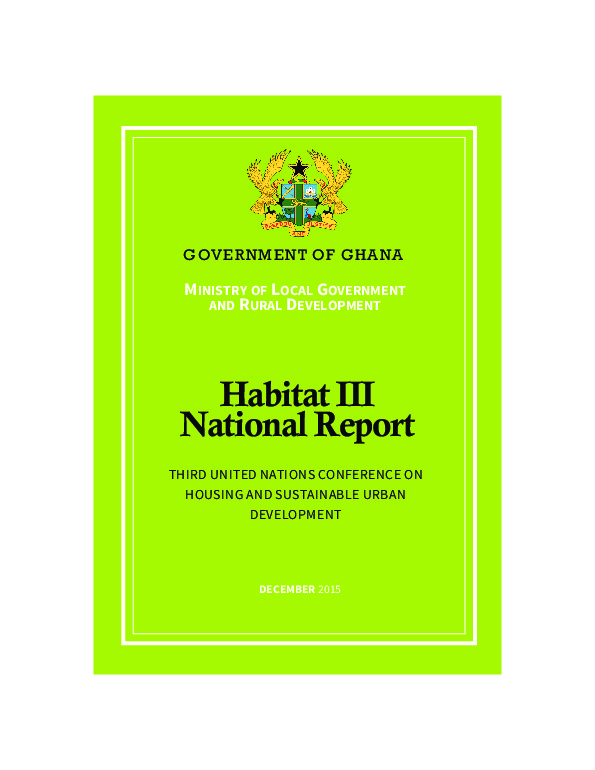 The issue of urbanization has gained attraction in development circles and global agenda more than ever. Since Habitat I & II, the rate of urbanization has more than doubled and the phenomenon has been seen as an essential catalyst for transformational development and change. Indeed, Ghana has experienced its fair share of rapid urbanization. This is informed by the fact that in 1970 the urban population was 29%; this rose to 32% in 1984 and 44% in 2000. The 2010 Population and Housing Census revealed that Ghana's urban population was 50.9%. In recognition of this rapid urbanization, Ghana has implemented several project and programmes to provide urban infrastructure in the area of urban roads, housing and energy. Since, the Habitat II, Ghana has achieved a lot and reduced poverty in urban areas culminating in better living conditions and growth in GDP. Ghana in recognizing this demographic change and its importance for the development process, that it initiated the process to formulate the National Urban Policy and Action Plan and launched it in 2012 to highlight critical issues to facilitate effective urban development. The Policy provides the overall framework and action areas for effective urban development. Sequel to that, the Ghana Urban Management Pilot Project (GUMPP) was designed and being implemented in four cities vide: Ho, Tamale, Sekondi-Takoradi and Kumasi Metropolitan and Municipal Assemblies to provide a number of urban infrastructural projects and to build capacity of the beneficiary Metropolitan and Municipal Assemblies. Similarly, there has been several housing projects to reduce the housing deficits in our towns and Cities. Quite obviously, the increasing urbanization of Ghana throws up both challenges to be managed and opportunities to explore. The key challenges revolve around the following:

First is the management of urban growth such that we ensure that the potential economic and social development arising out of urbanization are optimized so as to reduce poverty, improve the quality of life of the urban population as well as take appropriate steps to protect the environment.

Secondly, we need to develop and implement strategies that will improve service delivery in our cities and towns. This requires scaling up services such as water supply, management of solid and liquid waste, and inadequate sanitary landfill facilities, among others.

Thirdly, increasing population density brings on board the development of slums, environmental and health problems, air and noise pollution and generation of waste that is difficult to manage.

Finally, there is a yawning gap between demand for infrastructural services and the capacity to finance urban development.

It is in the effort to contain these challenges and improve on the living conditions of the urban population that this report, Habitat III, has been prepared. The report takes cognizance of the challenges in ensuring sustainable urban planning and design, improving urban land management, enhancing urban and peri-urban food production, and addressing urban mobility challenges, among others.

The Habitat III Report acknowledges the challenges encountered during the past 20 years (i.e. Habitat II) of implementing various urban programmes and interventions. The Report further documents the key lessons learnt during the period. These lessons would be taken into account in shaping the “New Urban Agenda”.