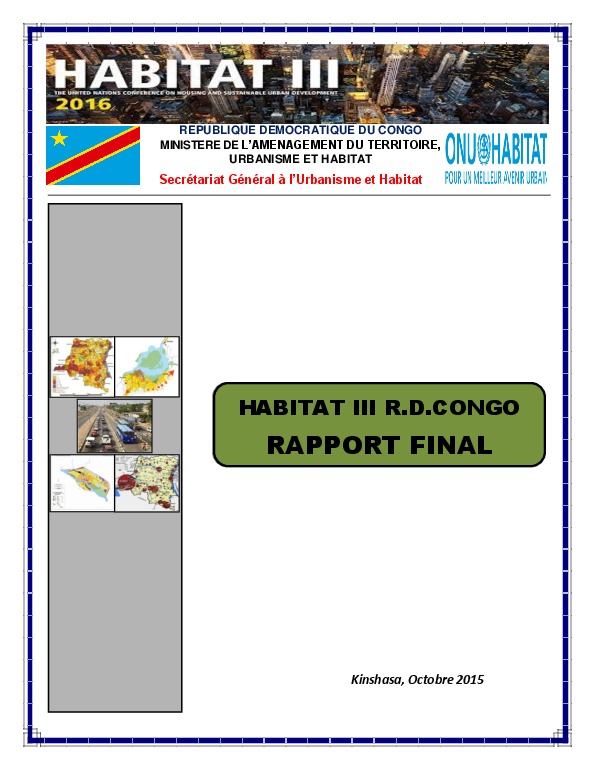 Huge country to the heart of central Africa, the Democratic Republic of the Congo overflows with a remarkable potential for the urbanization of its territory. The present urban network marks the organization of the country and offers strongly at the same time a lot of advantages and disadvantages to the populations that it deserves to surround. Constraint, stakes and challenges are pointed up in this report after analysis, in inclusive way, the evolution of the rhythm of the urbanization of the country since 1996. Also, a look is carried on the future of the habitat of this country for the twenty following years.

The demographic question raises a lot of stakes and challenges in Congolese urban area. The D.R.Congo knows a quick urbanization, with the exceptional rates (more than 40% either in 2014 against 26,4 % for the previous decades and almost the same rates for the future projections, or in 2014 and 2034). The management of the urban phenomenon would be controlled, the major problem being that the urbanization takes place outside of all norms of urbanism. The urban challenges crystallize here around the acceleration of the rural depopulation because of a big part to the presence of the conflict and to the insecurity in number of regions of the country. Believes it naturally is also important, the birth rate and fertility being raised to (5,1% and 7,7% for Kinshasa). The intensification of the life of relations between the farming world and cities generate difficulties of all sorts, cities attracting more and more farming. Where needs constantly multiple to satisfy in urban area, as for the place of women that counts for about 51% of the total population in cities, the efforts remain to make again.

In the sector of the planning and urban planning, the obstacles met result from the socio-political crisis and the anarchical occupations of the spaces, the public authorities appearing out of date by the stakes of management of the urban spaces.

The urbanization is linked to the other environmental problems of general order, such the struggle against the climate change, reduction of the risks of catastrophes, the struggle against the pollution of air in urban area, etc. Despite of the legal instruction (framework convention of United Nations on the climate changes, REDD+ process integrating the Democratic Republic of the Congo; the challenges of urban management remain multiple, determining the factors being demographic, economic, and institutional order. The challenges of the urbanization in this domain mark themselves by the excessive exploitation of the natural resources in the periphery of the cities. Before the thrust of poverty and the lack of an efficient politics of management, it would be necessary a strong governance to re-establish the balance of the urban ecosystem.

The governance and urban legislation meet many difficulties as long as the politics of decentralization is not even efficient to the local level, especially in the matters touching to the urban legislation or competences of the basic urban entities.

The axes of improvements of the urban governance pass by several track: (a) to decentralize and reinforce the local collectivities; (b) to improve the participation of the population and the human rights in the urban development; (c) to reinforce the security and the serenity in urban environment; (d) to improve the integration and the social justice.

Facing the obstacles met in domain of the decentralization, the new programs of urban development should found on the backing of the legislation concerning the urbanisation and the improvement of the social integration; for avoiding that the cities become the zones of non right and of urban insecurity pockets.

The indicators of the urban economy are difficult to surround since the townships whose financing must be improved don’t hold a rigorous urban accounting, the laws on the subject being again under development. The capacity of the local authorities to improve the financing of the townships is always thrown into question by an incomplete decentralization. Despite of the economic progress achieved in 2010, with a general growth rate of order of 5, 3 and a GDP of 12, 5 billions of us dollars, (Ministry of the Plan), the sector of the urban economic must be boosted, by the following mechanisms: the backing and the improvement to the financing of the accommodation, the support to the economic development of the local communities, through the reinforcement of the support structures to the development, and the creation of decent job and subsistence means. The construction of an urban economic development armature is a determining stake for economic sector.

The public authorities must determine the important areas at a time for the redeployment of local employment and the poles of development encouraging the concentration of economic activities in periphery of the cities. Example of BUKANGA-LONZO that remains probably eloquent.

The spiny problem of accommodation and the basic services. The Congolese are confronted to a crying deficit in accommodation whose needs estimate themselves to 3 million accommodations per years for the whole country between 2001 and 2015. The other basic services endure the same deficit. The public authorities must improve the access at the appropriate accommodation, to assure the permanent access to the drinking water, the rate of servicing being fallen of 49% in 1990 against 38% in 2009 and 2010, to assure the permanent access to the elementary systems of purification and drainage, (according to an investigation, the condition of the toilets in urban environment is rudimentary to 74, 5% between 2007) etc.

The access to the domestic energy poses really problem in the cities: 88,6% of urban households used the strong fuel again in 2007 against 86% in 2004, in spite of the hydroelectric potential of the country for example, the fashion of viable transportation impose himself, notably for the public transportation on proper site in Kinshasa.

The indicators on the basic urban services determine the rates of supervising differentiated in the Congolese cities. These data hide the important disparities that exist between the main cities (Kinshasa, Lubumbashi, Kisangani) and the other of middle importance (Matadi, Kikwit, Bandundu, Kananga, Mbuyi-Mayi, Goma, Kindu, Bukavu, Mbandaka, etc.).

The survey of case, concern here the case of Kinshasa where the state of the places on the type of habitat planned is presented, through a sample regrouping the urban realizations that leaves somewhat of the plain.

Finally, the perspectives and strategic documents. The report of the habitat III encloses itself by a presentation of synthesis, integrating as the picture the chronogram of actions of strategic orientation of the National Plan of improvement of the habitat. Here are the following axes cleared: (1) domain of activities; (2) actions to lead; (3) results waited; (4) indicators; and (5) sources of verification.