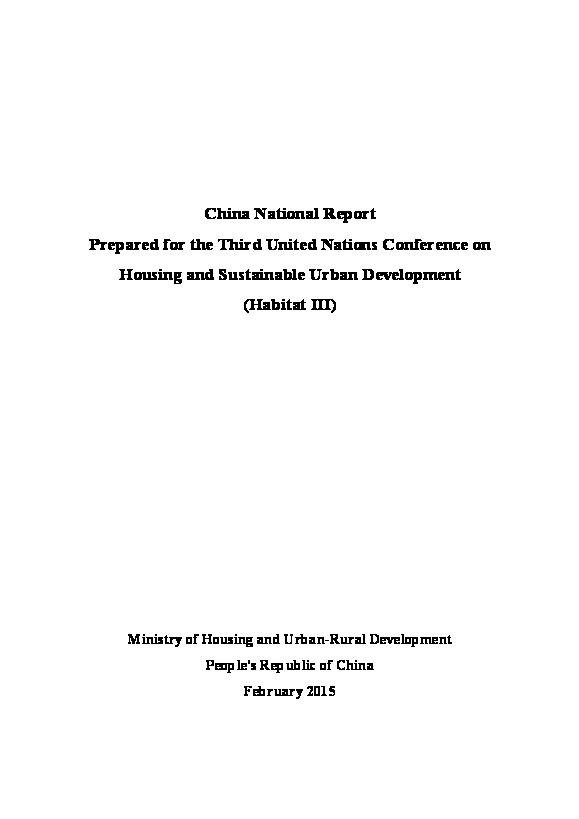 Among the declarations pervading the 21st century is that we have come to the “urban age” because, for the first time in human history, more than half of the world’s population lives within cities. At the critical juncture of jointly addressing challenges and building a better future, the Third United Nations Conference on Housing and Sustainable Urban Development (Habitat III), to be held in October, 2016 at Quito, Ecuador, is aiming at a new historic blueprint – the New Urban Agenda. This conference, as another important global event following the Second United Nations Conference on Human Settlements (Habitat II), will become a new start for future-proof housing and sustainable urban development in all countries.

In order to promote and support Habitat III as well as enhance more significantly the quality of human settlements in China, the Chinese government has organized relevant departments to prepare the Habitat III National Report. This report summarizes the efforts and successes of human settlements in China over the past 20 years, analyzes the challenges and problems ahead, and specifies the objectives, strategies and actions for the next stage.

This report is jointly prepared by relevant government departments, NGOs, academic and research organizations in accordance with the requirements of UN-HABITAT Governing Council Resolution 24/14. It is hoped that this report can contribute to the success of Habitat III.

We thank the government of the People's Republic of China for their contribution to the Habitat III Trust Fund, which ensured the inovative and inclusive nature of the Habitat III process.