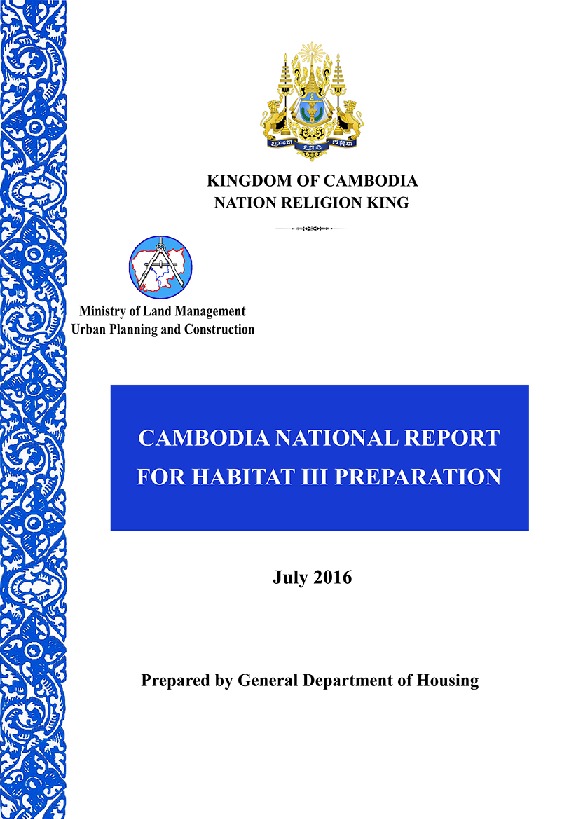 Cambodia’s major centres have undergone rapid urbanisation over the last twenty years. This rather unplanned growth lead to an unbalanced population and economic development in Cambodia with a high concentration particularly in the capital city Phnom Penh, which dominates with around 1.8 million inhabitants and is considered to be a primate city. The population of Phnom Penh doubled over a period of eight years, from 1998 to 2006. Five other major urban areas, which can be considered as secondary cities with an excess of 100,000 inhabitants, including Sihanoukville (located on a port, with manufacturing and tourism potential), Battambang (agri-business) and Siem Reap (tourism). The status of towns is defined by the difference between municipal and non-municipal towns. The 27 municipalities (most of them only established in 2008) comprise 2.9 of the 3.6 million urban residents.

The urbanisation rate of Cambodia measuring 27.1% in 2011 - published after a reclassification of the census data from 2008 – is still relatively low for the Asean Pacific region. This low urbanisation rate is connected to historical implications of the Khmer Rouge period in the 70s, which led to an emptying/ evacuation of cities to create an entirely agricultural based country. During the 1980s people started to slowly return to the urban centres and begun to occupy buildings and land informally. The growth at this time was still reluctant, as low intensity conflicts and international isolation continued until 1991 along with insurgency and political uncertainty.

Following this period, Cambodia’s urban areas grew at an average rate of 4.34% annually between 2000 to 2010, a rate considered globally as one of the highest. This high growth rate can be attributed to large-scale rural-urban migration following the Paris Peace Agreement in 1991 and to natural population growth after three decades of civil unrest and war.

The current situation of Cambodia can be described as an early stage of demographic and economic transformation from an agrarian to a mixed industrial/agricultural economy and society. This alteration from an agrarian to an urban-industrial pattern of development led and leads to an urban concentration, mainly in Cambodia’s most fertile river valleys and flood plains as the existing urban agglomerations there provide regional resource endowment, transportation corridors and economic opportunities. The following map shows the heavy concentration of population on less than half of the country’s land, resulting in relatively high population densities. In figures this means, that around 90% of the 15 million Cambodian residents live on 80 000 km2 which resembles 40% of the county.

Currently the urban sector accounts for roughly 50% of GDP. Whilst further urbanization has the potential to generate many economic benefits for Cambodia, there is the significant threat that if not planned and managed well in the near future, social, economic and environmental costs will occur. The Ministry of Land Management, Urban Planning and Construction (MoLMUPC) is therefore currently raising awareness in its framework for the „National Urban Development Strategy‟, that a medium and long term, economic and environmental sustainable growth of urban centres is only possible, when the urban planning and development management on all levels is improved and compact and livable urban areas are created.

Furthermore, the Royal Government of Cambodia (RGC) released recently its new five-year overall strategy, the Rectangular Strategy Phase III, which defines the main activities of the RGC. Good governance is at the core of the strategy, as a prerequisite to sustainable development. Urban areas were recognised as major engines for the future development of the country, as well as the need to put more focus on an integrated way of handling pressing urban issues instead of thinking of them on sectoral terms and managed by individual ministries. Therefore, in 2012 a National Committee for Land Management and Urban Planning (NCLMUP) was established, involving representatives of 24 line Ministries and agencies.