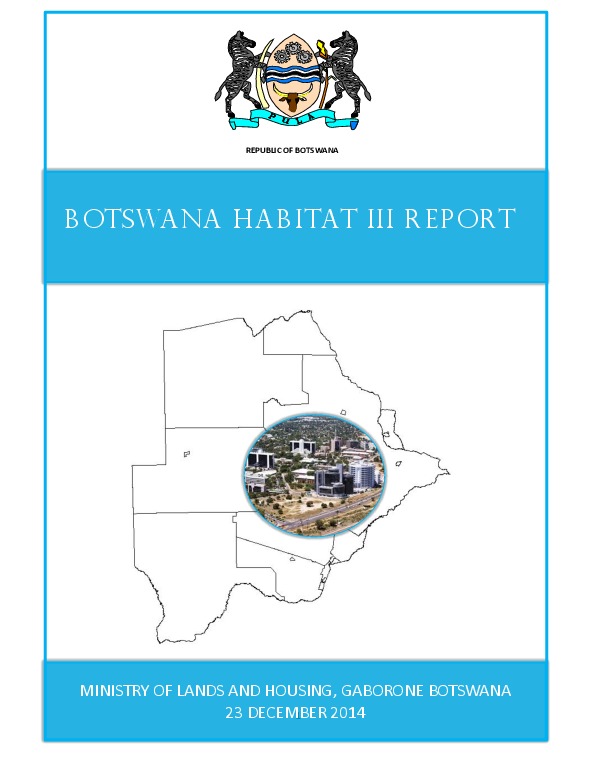 The Botswana Habitat III Country Report discusses the progress that the country has made in   implementing the Habitat Agenda since 1996. The main goals of the Agenda were stated then as focusing on the provision of ‘adequate shelter for all” and the realization of “Sustainable human settlements in an urbanizing world”. In discussing the Habitat Agenda, the report also highlights the achievements, challenges and lessons learnt in its implementation.  As per the requirements of the Habitat III Conference to be held in 2016, the report also identifies urban priorities which should form the core of the New Urban Agenda (NUA) for Botswana. The discussion in the report is structured around six main themes.

In conformity with the requirements for the preparation of the country report, the discussion focuses specifically on urban areas. This notwithstanding, there will be instances in the report where data presented reflects national figures largely due to the dearth of disaggregated data for some key sectors of the economy.

Botswana experiences one of the fastest urbanisation rates in developing countries. Like in other developing countries in the global South, urbanization in Botswana has not been without challenges. These challenges include amongst others inadequate access to land for housing, inadequate access to infrastructure, poverty and unemployment. Environmental challenges such as pollution, littering, overcrowding (especially in low-income residential areas) have been some of the consequences of the urbanization process. Rural-urban inequalities also increased over the years resulting in urban bias in the country’s development process. Within the emerging urban areas, the urban divide is evidenced by the emergence of gated residential estates and up-market shopping malls alongside burgeoning low income and inadequately serviced urban spaces where the informal sector has become a dominant activity.

Botswana’s response to the challenges cited to be associated with the urbanization process provides a measure of the progress the country has made pursuant of the Habitat Agenda.  The main conclusion drawn in the report is that the country has made commendable progress towards realization of the Agenda. For instance, measures have been put in place to accord the urban population access to housing and related infrastructure. The development of slums has been kept to a minimum.   This was realized mainly through the introduction of proactive legislative and administrative measures. Botswana has also witnessed the introduction of legislative instruments aimed at the creation of sustainable human settlements.  In addition, the country has undergone strategic administrative changes aimed at decentralization and increased citizen participation in the development process. Economically, the country’s urban areas continue to be major players in economic development as centres of commerce, retail and emerging manufacturing and service industries. Measures aimed at attracting foreign direct investment continue to be pursued alongside the adoption of Local Economic Development (LED) initiatives. The country has also witnessed implicit recognition of the informal sector activities.

The above notwithstanding, more needs to be done to pursue the sustainable human settlements agenda in Botswana particularly in view of the increasing rate of urbanization which has grown from 45.7 % in 1991 to 61.8% in 2011, and is expected to have risen to over 70% in 2021 (Statistics Botswana, 2011). The NUA should among other things address questions relating to urban governance, urban security and the mainstreaming of climate change and disaster risk management in spatial development plans. In the face of increased globalization, it is important that the NUA helps the country retain its identity through the preservation of the uniqueness of the country’s urbanizing rural settlements.

The preparation of the Botswana Habitat III Report was premised on inclusive and broad based participatory methodologies. Stakeholders were drawn from the public sector, private sectors and civil society in general. Under the guidance of a multi-sectoral Reference Group, a multi-disciplinary research team from the University of Botswana was tasked with the preparation of this Report. In addition to detailed desk top review of policy documents and legislative instruments, consultative meetings were held with key informants drawn from a wide spectrum of Habitat Agenda partners in Botswana. These included the Botswana Police Service, physical planning and housing officials, youth representatives and various NGO functionaries. The validation of the Report was realized through a national consultative workshop at which proposals from different stakeholders were refined and consolidated into this Report. Please refer to page 60 for detailed list of the National Habitat Committee that was involved in the preparation of this report.