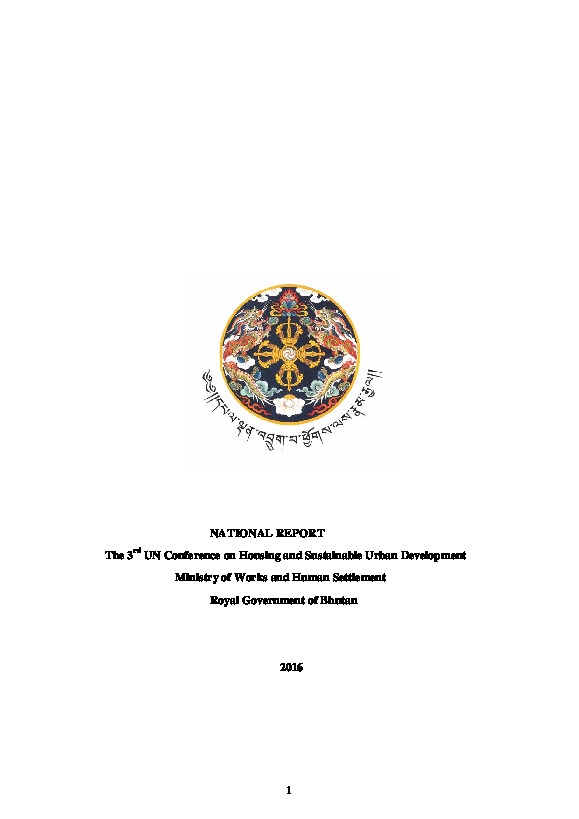 Bhutan, with an area of 38,394 square kilometers, is located in the eastern Himalayas and shares its boundaries with China to the north and Indiato the east, south and west. The elevation of the country ranges from 200 m in the south to 7000 m in the north resulting in diverse climatic conditions and biodiversity. Administratively the country is divided into 20 Districts comprising of 205 Blocks. The Population and Housing Census of Bhutan (PHCB) 2005 counted a population of 634,982 which had increased to 757,042 in 2015. The Population Perspective Plan 2010 projects that despite the low growth rate, the population of Bhutan is expected to increase till the end of the century, doubling itself from the 2005 figure by 2040.

Bhutan has undergone rapid urbanization in the last few decades. As per the PHCB 2005 over 30% of the total population lives in urban areas, compared to 15% 1999. It was observed that most of this rise in urban population is attributable to the high rate of rural urban migration. This is corroborated by the fact that the natural growth rate for both urban and rural population has remained fairly constant. On the other hand, the number of vacant houses in rural areas, referred to as gung-tong, is increasing annually as does the shortage of farm labours. Such a trend creates excessive demand of the urban services while those provided in the rural areas are not optimally used. This is may be detrimental to Bhutan's development concept of promoting balanced socio-economic development, environmental conservation and cultural preservation through good governance.

The process of urbanization is inevitable. While it has brought in economic opportunities, it has also led to numerous issues and challenges. A major consequence has been developments occurring before urban planning leading to such issues as inadequate infrastructure, land speculation, unplanned and illegal development, housing deficit, exposure to disaster risks, etc. Further, statistics based on PHCB 2005 show that while 44% of the total population is concentrated in the western region constituting only 20% of the total land area, around 65% of the urban population is in the western region. In terms of the level of urbanization, the western region has 45% while the eastern region shows only 18%, compared to the national average of about 31% despite the latter’s significant population size and higher growth rate in urban population. On a positive side this indicates a latent potential for urbanization.

The high rate of rural-urban migration, particularly to one or two regions and disparity in the level of urbanization is seen as unsustainable. Therefore, efforts are made to promote equitable and regionally balanced development both in the urban and rural sectors. A major step in this direction has been the declaration of 20 autonomous District Municipalities and 20 Satellite Municipalities. The National Human Settlement Policy has been drafted to provide the overall framework for the development of human settlements. Further, as recommended by the National Human Settlements Policy, the Spatial Planning Act and the Spatial Planning Standards have been formulated and the National Human Settlements Strategy is being prepared. These new initiatives together with the existing policies, strategies, legislation and guidelines aim to promote human settlements that are environmentally sustainable, culturally vibrant, economically strong and highly live-able.

This report, Bhutan’s Habitat III National Report, is divided into 4 sections. The first section provides background introduction. Section two documents the different phases and processes involved in the preparation of the report. The third section contains the main report organized under six key topics further divided into 30 different issues. Each issue consists of a general discussion, achievements since the Habitat II, the challenges experienced and lessons learnt and the future issues and challenges to be addressed by the New Urban Agenda. The fourth section has indicators for which relevant information were available.