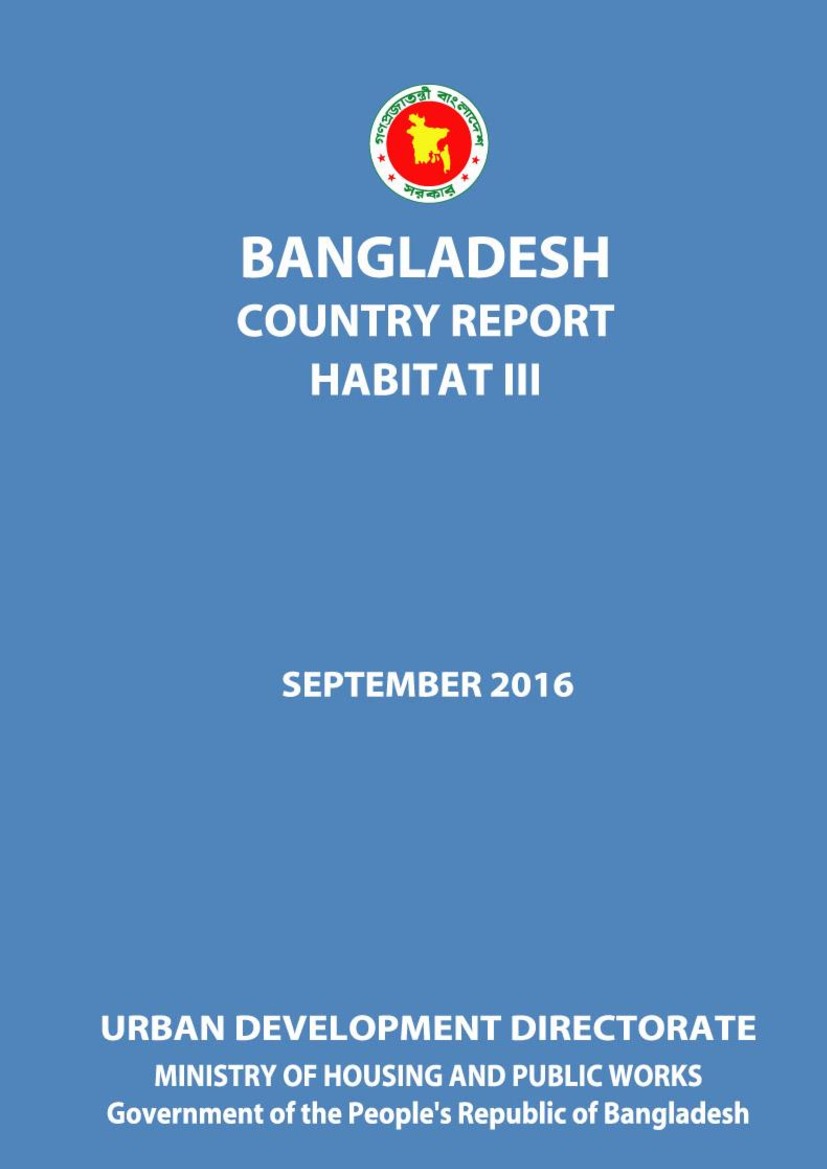 Bangladesh has been experiencing rapid increase in its urban population ever since its independence in 1971. Urban population as a percentage of total population increased from around a little below one-tenth to nearly one-third during 1974-2011 periods. It is estimated that by the year 2021 about one-third of the population of Bangladesh will be living in urban areas. The urban population recorded during the 2011 Census was around 42 million. The tremendous challenge of absorbing such a massive number of people in urban areas and providing them with shelter, food, employment, healthcare, education, municipal services and recreation facilities is made more difficult under the given shortage of urban facilities and resources, skilled manpower and good governance. The urbanization challenge, unless managed well, could pose a serious problem to the future growth prospects for Bangladesh.

Rapid urbanization has been posing serious challenges for sustainable urban development and poverty has increasingly been urbanized by way of transfer of the rural poor to urban areas. More than half of the urban population is concentrated in Dhaka, Chittagong and Khulna Metropolitan areas. The tremendous challenge of absorbing such a massive number of people in urban areas and providing them with food, shelter, employment, healthcare, education, municipal services and recreation facilities is made more difficult. As one of the most climate vulnerable countries in the world, Bangladesh would become even more so as a result of climate change impacts. Floods, tropical cyclones, earthquake, storm surges and droughts are likely to become more frequent and severe in the coming years. Considering hazards, UDD has prepared a module for mainstreaming disaster risk prevention measures into comprehensive land use development planning and management at municipal level named as Mymensingh Strategic Development Planning (MSDP) Area for twenty years (2011-2031). The aim of the plan is to prepare an integrated development plan covering Structure Plan, Urban/Rural Area Plan and Action Area Plans and subsequent training module including disaster risk reduction measures into comprehensive land use planning and management.

Big cities including Dhaka have serious problems with basic amenities, slum and untreated industrial waste disposal. In the urban areas there is improper land development, whereby low lying lands, canals, and ponds are filled up for constructing buildings. Reduction in water retention areas is causing water logging and drainage problems. Construction of roads without appropriate environmental mitigation measures is adding to these problems. Flood protection activities around urban areas without environmental mitigation measures are also responsible for water logging. However, the idea of ‘compact township’/rural township which is a self-governing and self-financing agglomeration of houses, hospitals, schools, playing fields, water reservoir, markets and rural industries within local government units that provide all basic services to the residents could be considered as an alternative option. Growth of these types of townships in rural areas will need to be encouraged in growth centres at Upazila and Union levels avoiding present trend of housing with low densities scattered in various locations. UDD is trying to promote the concept of compact township’/rural township by planning the whole sub-districts integrating urban-rural and conservation areas.

Experiencing a fast pace of urbanization, in last 50 years (1961-2011), the total population of Bangladesh has increased from 55 million to 150 million, whereas urban population has increased from 2.6 million to 43.43 million (BBS, 2011). Thus demand for housing has become a crucial challenge for urban areas, though large shares of urban population do not have access to affordable housing. Moreover, unplanned land development project for housing has become threat on environment. Dense population with rapid urbanization, industrialization and lack of disaster resiliency in land use planning have created major environmental problems which contribute to increasing disaster risks such as flood, water logging, traffic congestion, air Pollution, water pollution along with loss of wetlands, agriculture land and forest. The strong commitment of government to ensure environmental sustainability through conservation of natural resources and reduce air and water pollution has been reflected in the Seventh Five Year Plan, 2016-2020. This plan has stressed the need to take into account environment, climate change adaptation and mitigation and recognizes climate change as an added challenge to reduce poverty and environmental degradation. Government has also adopted necessary policies, rules and acts to protect environment and to ensure sustainable development.

The sprawling expansion of the city is mostly initiated by Private Land Developers is continuing with encroachment of flood plains, high value agricultural land and other environmentally sensitive areas. In such a context, good governance, accountability, capacity building of relevant organizations are very crucial along with strong political commitment. Waste disposal is an emerging problem in almost all urban areas of Bangladesh. The increase in waste generation can be primarily attributed to factors such as rapid rate of urbanization, changing consumption pattern and high population growth rate. Risk Sensitive Land Use Planning approach is still absent in the mainstream plan preparation methodology. In this relation, Urban Development Directorate has played pioneering role as they had developed a module for mainstreaming disaster risk preventive measures into comprehensive Land Use development planning and management for Mymensingh Strategic Development Planning (MSDP).

Lack of adequate housing for large urban population is obviously a key problem in all of the cities and secondary towns in Bangladesh. Housing deficit in urban areas grew from 1.13 million units in 2001 to 4.6 million units in 2010. The deficit is projected to reach 8.5 million units in 2021 if investment in the housing sector does not keep pace with the growth of population. Nearly 44 percent of the urban households live in purely temporary structures while those living in semi-permanent structures comprise about 29 percent of the urban households. Only about 28 percent of the households live in permanent structures. These data suggest that overwhelming majority of urban households live in less quality houses. So, in terms of both quantity and quality, urban housing presents a need for major policy challenge in Bangladesh.