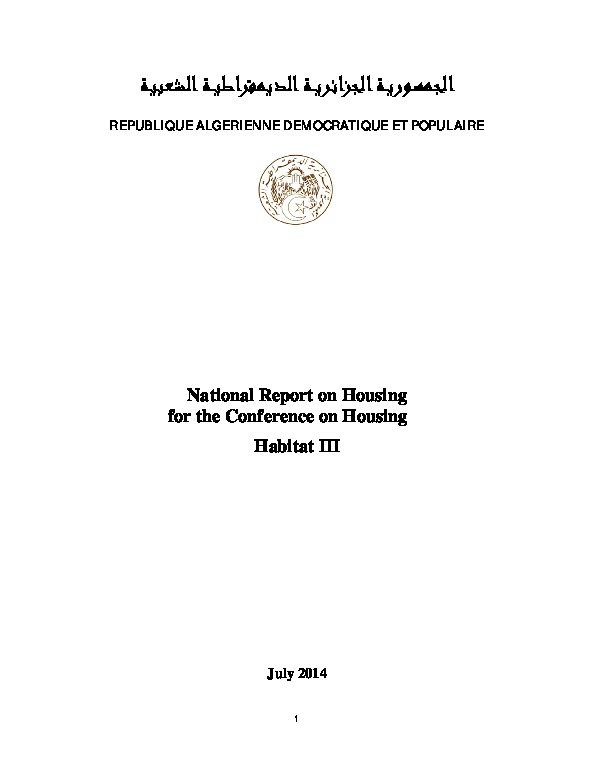 The urban population in the world has seen, from the 50s, a rapid growth to cross the historical threshold of 50% in 2007. In Algeria, one of the notable events which emerges from the General Population and Housing Census of 2008 (RGPH) is the rapid growth of the urban population representing 66.3% of the population while it was 31% in 1966, moreover, the growth of urban areas, the number increased from 95 units in 1966 to 751 in 2008.

Actually, after being a country with a large predominance of rural population during the early years of independence (69%), Algeria has gradually reduced its urban deficit to an estimated urbanization rate of currently 70%.

As well as the construction of housing to remedy the existing deficit and face the request, the new urban policy aims to give the city and urbanization, the role and the quantitative and qualitative dimension that must be carried in the development and the operation of territory and at different scales.

This policy is based on the guidelines specified in the three roadmaps both national and international, with strategic character, including:

However, in spite of progress achieved, we realize that Algerian city accumulates delays related to its urbanization process, conducted in emergency to meet the growing needs of population in housing.

To remedy this situation, National Scheme of Land Planning has defined 8 programs, devoted to the city and urban development that must be implemented in order to face challenges of urban planning. Which are:

At the same time, Algeria increases efforts to mitigate and reduces in the long-term major disparities in its resources and population distribution revealed by latest preliminary results of RGHP 2008.

After elaborating these territorial development policies, Algeria endeavors to ensure follow-up and implementation of territorial sustainable development basing , on the one hand, on a participative approach based on dialogue between and with all actors and, on the other hand, on incentive in all instruments recommended by the law on Sectoral Master Plans (SDS) and territorial Plans.

Algeria aims, through all these actions, to deal effectively with country urban problems, through coordination between all stakeholders. It aims, also, to consolidate the whole efforts made by different sectors that contribute to set conditions for a qualitative management of urban spaces.