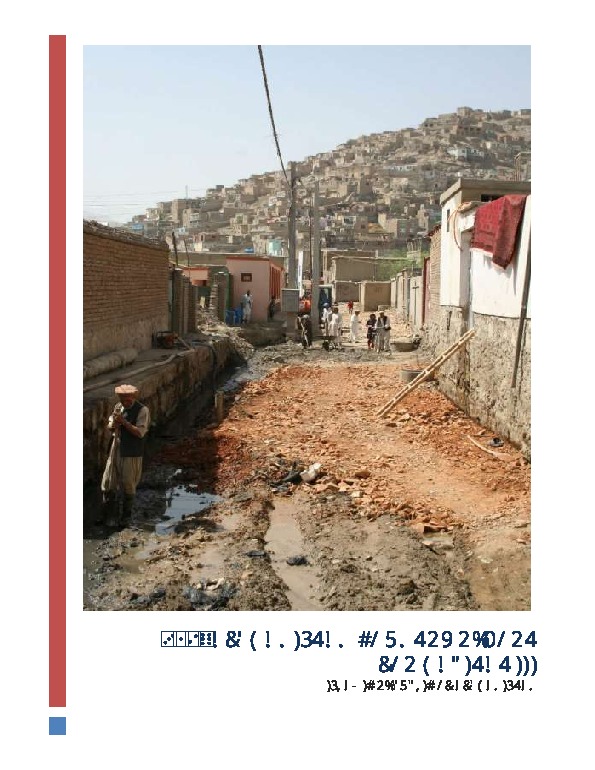 Afghanistan is amongst the fastest urbanizing regions of the world, with an annual urban growth rate of 4 percent. It is projected that the country’s urban population may triple to 24 million within 35 years, having profound consequences for the country’s development. The ongoing urban transformation is occurring alongside a demographic transition-a “youth bulge” with more than 60 percent of Afghans under the age of 20 years. Afghan refugees and returnees, and internally displaced persons today represent 20 percent of the total population. Urban centers are the preferred destinations of most of these 5.8 million refugees seeking access to housing, basic services, and livelihood opportunities. Furthermore, more than half of Afghanistan's internally displaced people (IDPs) live in urban areas. In the country’s transformation decade (2015 – 2024), Afghanistan’s urban areas will play a crucial role as centers of knowledge, innovation, and enterprise to propel the country’s economic transformation and growth.

The National Unity Government is spearheading a reform agenda – “Realizing Self-Reliance: Commitments to Reform and Renewed Partnerships,” presented at the London Conference in 2014, which lays out the roadmap for Afghanistan’s transformation decade. The framework emphasizes the need to improve security, better governance, reduce poverty and stimulate job creation. Urbanization presents a distinct opportunity for Afghanistan as a driver of prosperity, stabilization, and state building.

However, an “urban agenda” has been largely missing in the past decades. Afghan cities have grown haphazardly, informally, with limited access to affordable and quality basic services, and with considerable socio-economic divisions and exclusion. There has been insufficient national policy and regulations to guide urban development; limited realistic and grounded spatial plans; and weak municipal governance to ensure equitable service delivery and effective management of the inevitable urbanization transition facing the country.

- Ensuring access to land, housing, and services is an immense challenge, yet there are also opportunities to harness urbanization as a driver of economic growth and social development. - Planning processes should be addressed at ‘city regions’ extending beyond the current administrative boundaries and focusing on the social and economic dynamic between urban conurbations and their hinterland. - Investments that have been made in upgrading urban services meet actual needs of only a small proportion of a fast-growing population. For this reason, opportunities for appropriate forms of public-private partnerships, where investors may be available, must be explored. - Monitoring the many dimensions of this urbanization process, such as levels of public and private investment, unemployment, the extent of poverty and reasons for vulnerability, access to services, informal systems of neighborhood governance and urban-rural linkages will be vital for effective planning and management in the future. - Sustained attention should be given to the contribution that Afghan women, youth and the elderly make to urban life and their potential – as citizens and professionals – to shape the way urban centers are planned and managed.