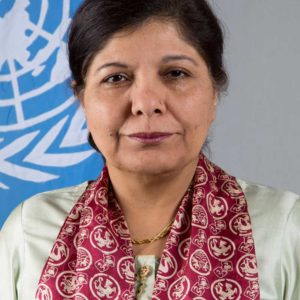 Dr. Shamshad Akhtar (Pakistan) is an Under-Secretary-General of the United Nations and the tenth Executive Secretary of the Economic and Social Commission for Asia and the Pacific.
Formerly the UN Secretary-General's Senior Advisor on Economics and Finance, and Assistant Secretary-General for Economic Development at the Department of Economic and Social Affairs, she led the UN-wide coordination of the initial work on the post-2015 development agenda, and was also the United Nations Sherpa for the G20.
Ms. Akhtar has previously served as Governor of the Central Bank of Pakistan and as Vice President of the Middle East and North Africa Region of the World Bank. In her capacity as Governor, Ms. Akhtar was also the Chairperson of the Central Bank Board and its affiliates, as well as a Governor of the IMF. She won two consecutive awards as Asia's Best Central Bank Governor from Emerging Markets and from the Banker’s Trust. In 2008, The WALL STREET JOURNAL ASIA also recognized her as one of the top ten professional women of Asia.
In her assignment for the World Bank, Ms. Akhtar spearheaded the Bank’s response to the Arab Spring, as well as the Arab regional integration strategy and its implementation. She served in the Asian Development Bank for almost 15 years, rising through the ranks from Senior Economist, to the highest professional positions, including Special Senior Advisor to the President of ADB, and Director-General of the South-East Asia region.
Ms. Akhtar was a post-doctoral US Fulbright Fellow at Harvard University, holds a PhD in Economics from Scotland's Paisley College of Technology, as well as a Master in Development Economics from the University of Sussex in the UK, and an MSc in Economics from Quaid-e-Azam University, in Islamabad.