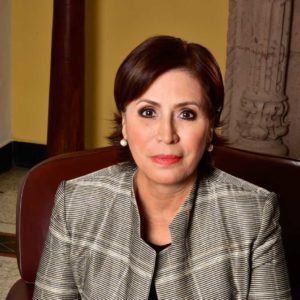 Rosario Robles is the Secretary of Agricultural, Territorial and Urban Development of Mexico (Sedatu), a ministry focused on the development of cities and housing, land management and its impact on natural protected areas. On 1999, Rosario Robles was sworn Mexico City’s Mayor, being the first woman to run the city. In the current Federal Government, from 2012 to August 2015, she served as Secretary of Social Development. During her mandate, Robles coordinated Mexico’s new generation social policy, launched the “National Crusade against Hunger”, and enhanced the most important social programs. She has also served as President of the Party of the Democratic Revolution (2002), Mexico City’s Secretary of Government (1997 – 1999), and Federal Representative for the 56th Congress (1994-1997). She obtained her Bachelor’s degree in Economics from the National Autonomous University of Mexico (UNAM) and later on a Master’s degree in Rural Development at the Autonomous Metropolitan University (UAM). Robles political career has been characterized by her dedication to empower women and guarantee gender equality in the public sphere and combating poverty.