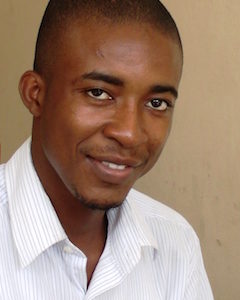 Togolese by nationality, Edouard Pihewa karoue is a young sociologist passionate about young people involvement in policy and development process as well as their empowerment. While preparing his PhD on sociology of International relations, he scored his involvement in youth organizations and especially in the International Movement of Catholic Students (IMCS Pax Romana). Within this movement where it has long been in charge of training, he initiated several national and regional projects in West Africa around the subject of entrepreneurship, peace building and transformative leadership. In August 2015 he was elected as International president by the world assembly of Catholic students held in Manila (Philippines).
In its capacity of President, he currently resides in Paris at the International office of the movement where he coordinates the actions of the movement in more than 80 countries across six strategic regions. He works to provide opportunities for training and capacity building for disadvantaged youth. It also plays a key role of representation and advocacy in international platforms, within the United Nations system and the Vatican.
Through the advocacy team of IMCS Pax Romana at the United Nations, Edouard coordinates and supports the active involvement of his organization in large platforms like UN Major Group for Children and Youth (UNMGCY) and International Cordination Meeting of Youth Organizations (ICMYO). He coordinate as well the active participation of the movement in all development processes deployed at the United Nations level.
At the last World Humanitarian Summit, Pihewa has been a speaker on behalf of UNMGCY where he challenged the governments and stakeholders to implement policies to quickly meet the needs of young people and children during humanitarian crises and reduce the funds allocated to armament.
His areas of interest revolve around topics such as:
• Values for sustainable development;
• Efficient communication strategies;
• Urban sociology;
• Social representations;
• International relations
• Conflicts and peace dynamics;
• Group management