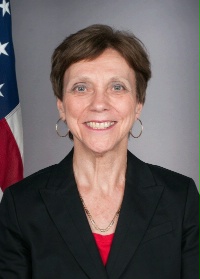 On June 23, 2014, Ms. Stetson was sworn in as the U.S. Special Representative for Global Food Security. As head of the Secretary’s Office of Global Food Security she is responsible for leading all aspects of U.S. diplomacy related to food security and nutrition, including in support of Feed the Future, the U.S. government’s flagship global hunger and food security initiative; the New Alliance for Food Security and Nutrition; and the 1,000 Days Partnership. Ms. Stetson’s diplomatic efforts to advance global food security and nutrition will target donors, developing countries, emerging economies, multilateral organizations, civil society, and the private sector. Ms. Stetson is a veteran of Capitol Hill, having worked for 26 years in the Senate, as Senior Foreign Policy Advisor to then-Senator John Kerry and as a Professional Staff Member of the Senate Foreign Relations Committee. She advised Senator Kerry on all national security, trade and foreign policy issues, providing strategic analysis and policy guidance, and developing policy positions and legislative initiatives. Throughout her tenure, she managed a spectrum of legislation and policy positions for Senator Kerry and the Senate Foreign Relations Committee on Asia, Africa, the operations and budget of the State Department, the United Nations, global health, and human rights. During her time in the Senate, Ms. Stetson traveled extensively in Africa and Asia, building expertise in the importance of food security to human and economic development. She was essential to some of the U.S. government’s major foreign policy achievements. During the 1980s she lead successful legislative efforts to protect and increase development assistance to Africa, as well as efforts to impose sanctions on South Africa to end apartheid. She formulated the legislative pieces and strategy for Senator Kerry’s efforts, with Senator John McCain, to move President Clinton to lift the U.S. trade embargo on Vietnam and normalize relations. She spearheaded bipartisan efforts to address HIV/AIDS and other deadly infectious diseases by drafting and negotiating the legislation sponsored by Senator Kerry and then-Senator William Frist which became the foundation for PEPFAR (the President’s Emergency Plan for AIDS Relief) under the administration of President George W. Bush. Before joining the State Department, Ms. Stetson worked in the private sector as the Vice President for Policy and Client Services at The Sheridan Group, which specializes in promoting the missions of nonprofit organizations. She also worked for the House Appropriations Committee. Ms. Stetson holds a Ph.D. in Political Science from Columbia University and a B.A. in Political Science from Wellesley College.