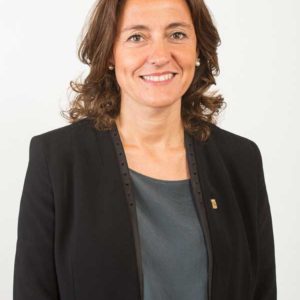 President of Diputació de Barcelona (Barcelona Region Council). For the past fourteen years , Mercè Conesa has been Councillor of the Municipality of Sant Cugat del Vallès, first as Deputy Mayor for Equality and Social Policies (1999-2003) and then as Deputy Mayor for Urbanism (2013-2010). Since 2010 she is also Mayor of her hometown. Besides this, she has been County Councillor at the Council of Vallès Occidental County. Prior to her public responsibilities, she taught administrative law at the Autonomous University of Barcelona and worked at the General Directorate of Local Administration of the Government of Catalonia. Moreover, she has been the head of the legal service of the Catalan Association of Municipalities and Counties. She holds a degree in law from the Autonomous University of Barcelona and different master degrees in public management, leadership and innovative in public policies from the Pompeu Fabra University, ESADE and IESE.