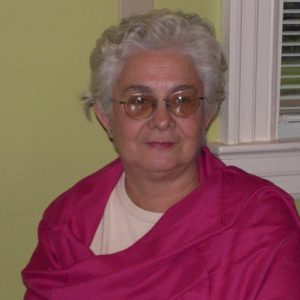 Rev. Marta Benavides (born in San Salvador, El Salvador) is a theologian, ordained minister, permaculturist, educator, and artist.
Marta Benavides was born in San Salvador, El Salvador in 1943. She is one of the few surviving activists fromthe original group of human rights and peace advocates who began their work during the 1970s in a rising climate of repression. In the early 1980s, Benavides was head of the Ecumenical Committee for Humanitarian Aid, a group sponsored by the Archbishop Oscar Romero. After Romero’s assassination in 1980, Benavides continued to work for durable peace.
In 1982 she went into exile and worked for the next decade from Mexico and the United States to bring an end through a political solution to the war in her country. In 1991 a year before the UN sponsored peace accords were signed, she returned home and founded the International Institute for Cooperation Amongst Peoples, which promotes the values and practices of a culture of peace. She established community training centers and travels throughout the country conducting workshops on Sustainable and Social development, sustainable agriculture-food sovereignty and its related aspects, climate change, human rights, and the prevention of community and family violence.
She founded the XXIII Century Movement for Sustainable Peace, the culture, the Free International University for Peace, the Folk Arts and Culture Museum AJA ( AHA).
Awards
In 2003, she was one of 33 Laureates of the Women's World Summit Foundation Prize for Women's Creativity in Rural Life. In 2005 she was among the 1,000 women nominated for the Nobel Peace Prize. In 2009, she was awarded the Woman Peacemaker Prize from the Institute of Joan B. Kroc for Peace and Justice in the University of San Diego, California. She is an honored member of the Ara Pacis Council for Dignity, Forgiveness, Justice and Reconciliation. She is one of the co-chairs of the Global Call to Action Against Poverty (GCAP) and sits on various ecumenical and secular boards at the international level. She continues to work for a culture of peace in her country and the world, through various initiatives at the UN (Sust Dev, Social Dev, FfD, CSW, A Soc for All Ages, Habitat, MDGs, SDGs, post 2015Dev Agenda, Climate Change) , and with civil society movements.