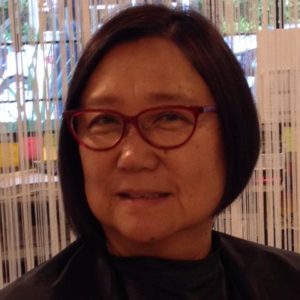 Marnie Tamaki has worked in Vancouver, New York, Sri Lanka and Papua New Guinea as a registered architect, supporting women’s community development projects. As a founding member of GROOTS Canada and a board member of GROOTS International, Marnie has been a housing and human settlements activist to help ensure that housing is recognized as a priority for women and communities; that women are recognized for their leadership & achievements, are able to speak & have a decision-making voice in all levels of government, planning & implementation (local-global) and that people most affected by policies & developments are part of the process. She brings a passion to supporting movement building among organized groups of community women in the North & South to catalyze democratic urban development & advance sustainable cities. She has facilitated multi-country peer exchanges involving grassroots leaders, organized several exhibitions of grassroots & professional women’s innovative housing, space claiming community development practices and co-authored the Our Spaces publication. While working in Papua New Guinea, she represented the PNG Department of Works shaping Women’s Platform for Action at the 1995 Fourth World Women’s Conference in Beijing and facilitated participation of grassroots women leaders from Canada & Papua New Guinea at the NGO Forum. At Habitat II Istanbul 1996 she was on the PNG government delegation bringing grassroots women’s issues to the Habitat Agenda.
Having been active in the UN Human Settlements process since Habitat II including the World Urban Forum series, most notably the 2006 World Urban Forum III Vancouver, Marnie is pleased to be part of the current preparations locally in Vancouver with Women Transforming Cities, on the Canadian Delegation and with the Huairou Commission. Marnie is looking forward to supporting women and the implementation of the New Urban Agenda in Vancouver and nationally through GROOTS Canada.