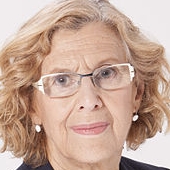 Manuela Carmena Castrillo is a Spanish lawyer, emeritus judge of the Spanish Supreme Court and the Mayor of Madrid since 13 June 2015. As a lawyer, Carmena defended prisoners and workers during Franco's dictatorship and represented the Basque Country, acting as spokesperson to the General Council of the Judiciary of Spain. She represented Spain in the Working Group on Arbitrary Detention in the UN and received the Manuel de Irujo award in 2008. She came out of retirement to carry out critical work with victims of police brutality for the commission set up by the Human Rights Bureau of the Basque Government Justice Department.