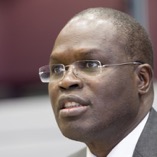 Khalifa Ababacar Sall has been Mayor of Dakar, Senegal, since April 2009 and is currently President of UCLG Africa. He previously held several Ministerial positions including Minister Delegate to the Prime Minister in charge of relations with Parliament (1995) and Minister of Commerce and Handicrafts. As Mayor of Dakar, Sall promotes good governance and aims to provide citizens with a quality municipal public service that adheres to the highest standards of transparency and participatory democracy, using inclusive dynamics to create frameworks that mobilize citizens.