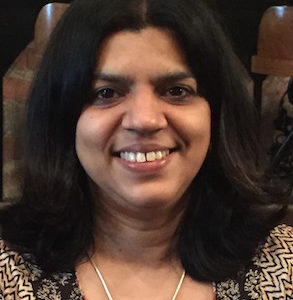 Kalpana Viswanath is a researcher who has been working on issues of gender and safer cities for women for over 20 years. She is the co-founder of Safetipin, a mobile app developed to support community and women's safety. She has worked as a consultant with UN Women and UN Habitat on issues of gender and urban safety on several projects around the world and has led research studies on violence against women in public spaces in cities.
She was the Project Director of the Gender Inclusive Cities Programme with Women in Cities International , an international network on women and cities. She has also provided technical support to safe city for women programs in Vietnam, Pakistan, Indonesia, Kerala, Mumbai and Kolkata. She is a Board member of the International Centre for the Prevention of Crime (ICPC) and the Chair of the International Advisory Committee of Women in Cities International (WICI). She has co edited a book on Building Gender Inclusive Cities.