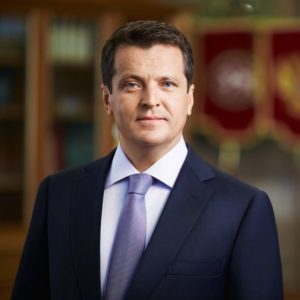 Ilsur Metshin was born in Nizhnekamsk, Russia, in 1969. He graduated in law in 1991 from the Kazan State University. Between 1993 and 2005, he served in the administration of the Soviet district in Kazan, the Vakhitovkiy district the Nizhnekamsk region and the Nizhnekamsk city (Tatarstan).   Deputy of the State Council of Tatarstan from 2000 to 2004, he was elected Mayor of Kazan in November 2005. Vice-President of UCLG and President of the Eurasia section of UCLG previously, he is Co-President of UCLG since 2010.   Since 2006, Ilsur Metshin is also Vice-President of the Organization of World Heritage; the International Assembly of Capitals and Big Cities; and the Russian Alliance of Historical Cities and Regions.