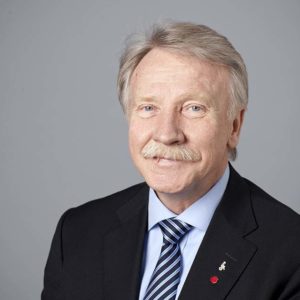 IImar Reepalu (born 11 October 1943) is a Swedish Social Democrat politician who was the Mayor of the City of Malmö from 1994 to 2013.  After a professional life as an urban planner and Architect in Borås and Malmö, he became a municipal councilor of Malmö in 1985. In opposition from 1985 to 1994, he then served as Mayor from the 1994 election until his retirement on 1 July 2013.   During his term as Mayor, Reepalu was consistently lauded as being instrumental in the transformation of Malmö from an industrial town in decline towards being a centre of knowledge, modern architecture, culture and green technology.    Reepalu helped to revive Malmö architecturally from its roots as a fading industrial city. Architectural projects that he helped to bring into existence during his mayoralty include the Oresund Bridge (completed in 2000), the Turning Torso building (completed in 2005) and the City Tunnel (completed in 2010).   As a confirmation of the role he has played in transforming the city, Reepalu was appointed Doctor Honoris Causa at the University of Malmö in 2015.