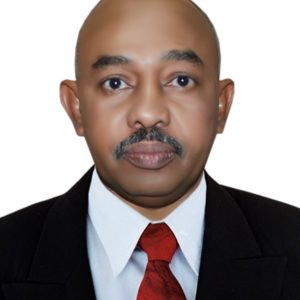 He attended all infantry &military engineeringcourses. He has Master degree (MA) in Military Engineering from Western German. Fellow of the National Defence College– Democratic Republic of Bangladesh. B.Sc. in Civil Engineering from Sudan University of Science and Technology. Representative of Sudan in the monitoring and verification mechanism for cessation of hostilities in Nairobi (2000-2004).Member of the higher national committee for mine action in Sudan.Memeber of the DDR programs' higherCoordinating Council. He represented the government of sudan in the Habitat III in surabaya 25-27 July 2016. He has many publications, books and scientific papers, and Sudan in the U.S strategy between the Great Middle East and Africa sub-Saharan is one his interesting book . He speak Arabic, English and German Language fluently. He visited all Arabic countries ,all the countries of Western Europe .Most of African countries .East and Middle Asia (India – China – Singapore – Malaysia – Indonesia).