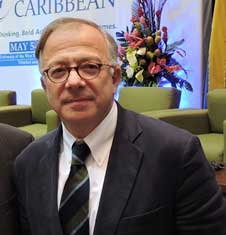 Giovanni di Cola, is Special Adviser in the Office of the Deputy Director General (DDG/FOP) at the ILO HQs in Geneva. Prior he was Director of the International Labour Organization (ILO) Decent Work Team and Office for the Caribbean.  A national of Italy, he holds a Doctorate (PhD) in Development Economics from the University of Paris X Nanterre, graduated from the University of Rome in Political Science and has a Master’s degree in Soviet Studies (DEA) from the Institut d’Etudes Politiques de Paris (IEP).  At the ILO HQs, he was Coordinator of the ILO-Universitas Programme between 2001 and 2008. He started his career with UNESCO in 1983 in Dakar, (Senegal) as Assistant to the Regional Director for Sub-Saharan Africa and then joined the UNICEF Office in Niger as Information and Communication Officer on emergency programmes.  In 1988 he joined the ILO’s labour-intensive programme in the Employment Department at ILO-Headquarters on the Portuguese-speaking countries of Africa.  Between 1990 and 1998 in Dakar, Senegal and in the ILO Regional Office for Latin America and the Caribbean in Lima, Peru and worked in the areas of programming and technical cooperation.  Between 1998 and 2000 he worked in the Department of Development Cooperation at the ILO-Headquarters on the ILO's Governing Body Report on Technical Cooperation and was in charge with relations ILO Arab States and Europe regions.  He acted as UN Resource Person for training UN Country Teams on United Nations Development Assistance Framework (UNDAF) in Eritrea, Peru, Cameroon, Tajikistan, Cape Verde, Albania and Iraq. He was then appointed in 2003 ILO Focal Point for ‘Sport for Development and Peace’ and published the first Report of the UN Secretary General on the matter.  He participated on three of the ILO Director-General’s High-Level Mission to the Arab Occupied Territories (2004-06).  During that same period he contributed to the organization of 4 UN Youth Leadership Summits.