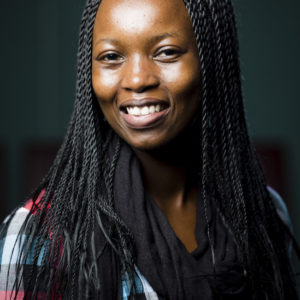 Ms. Esther Maina has a Master’s degree in Conflict, Security and Development from King’s College London and a Bachelor’s degree in International Relations from United States International University – Africa. For short periods of time, she worked in the Kenyan government and international organization in multilateral issues. She is an Honorary Board member; Team Support in Tuwakuze Africa. She assists the Board members in the various activities held annually and contributes to the planning of Tuwakuze’s yearly strategy. She has been working with young people in various aspects: leadership and development (AIESEC – Kenya); organizing events during the International Youth Day 2016; and in discussions of education reforms in Kenya.
Ms. Maina is an avid supporter of the Sustainable Development Goals. She rallies young people through social media to own and accomplish the goals. She believes that the youth will be affected in one way or the other with the success or failure of Agenda 2030 hence why they need to have ownership of it. In Tuwakuze Africa together with the team, they support and equip the children with sustainable skills. The skills enable the children to take care of the environment and society around them. Every day Ms. Maina chooses to live by what Mahatma Gandhi said, “You must be the change you wish to see in the world”. She adds that, “If you see there is a problem in society, create a solution instead of complaining”.