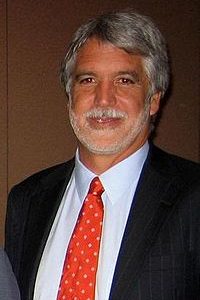 Enrique Peñalosa Londoño (born September 30, 1954, Washington, D.C.) is a Colombian politician. He was mayor of Bogotá from 1998 until 2001, and was re-elected in 2015 for the 2016–2019 term. He has also worked as a journalist and consultant on urban and transportation policy. In 2009, Peñalosa was elected President of the Board of Directors of the Institute for Transportation and Development Policy (ITDP), a non-profit organization headquartered in New York.