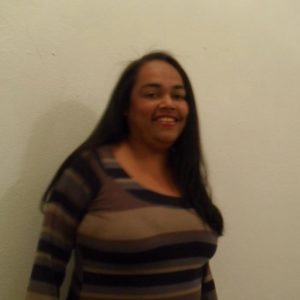 ELISA URBANO RAMOS,is a 44 years old Pankararu indigenous woman. The Pankararu territory is set in the dry area of Pernambuco and was formally recognized in 1987 and the part of the territory in which she lives counts for 8.100 hectares. She lives and learns about their ancestors’ knowledge since her childhood to date. That ensured the condition to live the costumes and traditions of her people, allowing her to observe the quotidian of the people and the changes that happened over the years.

Elisa has a degree in LETRAS and has post-graduation in gender issues.She works in the land cultivating and applying all traditional knowledge but also works in her tribe school as a teacher, where she has the opportunity to combine formal education withtraditional indigenous knowledge.Her job gives Elisa the capacity to think about her identity as an indigenous woman and also to engage in the indigenous movement.

In 1994 Elisa starts her activities as a member of the indigenous movement, where she saw the opportunity to fight for land rights for her people and for the women. In her trajectory she has learnt the importance of combining her activism and need to deepen the intellectual production and to integrate the collective movements that fight for indigenous rights, indigenous school education, women’s rights and to connect this to other struggles and to strengthen the ethnic identity and traditional knowledge. Hence, it is in this context that she can engage in the movement activities in state, regional and national level.

She is part of the Pernambuco Indigenous Teachers Commission - COPIPE, an organization that discusses and fights for an indigenous education and also a member of the Northeastern, Minas Gerais and Espírito Santos People and Indigenous Organization Articulation – APOINME in which Elisa represents the indigenous women. Besides, she is also member of the Pernambuco Permanent Commission of Rural Women – CPMR and participates in other movements and spaces dedicated to the gender issues.