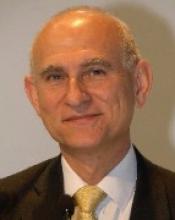 Dr. Oliva is a chemical engineer with a doctorate in physical sciences, and a graduate from Institut d’Administration des Entreprises. From 1975 to 1978, he lectured at Institut de Préparation aux Etudes Supérieures in Paris. From 1979 to 1981, he was a research engineer at SAFT, Bordeaux. In 1982, he joined Michelin in Clermont-Ferrand as an engineer at the Technology Center. From 1986 to 1988, he served as personnel manager for the Greenville, S.C., Research Center / USA. Returning to France in 1989, he worked in R&D for six years. In 1996, he was appointed Corporate Vice President, Communications, for the Michelin Group. From 2001 to 2007, he was Corporate Vice President, Group Projects, and Secretary General of the Group Executive Council. In January 2008, he became Corporate Vice President, in charge of Prospective and Sustainable Development.