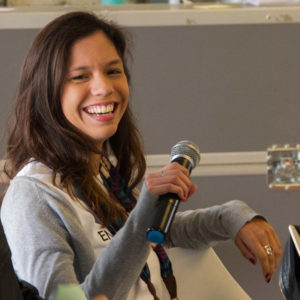 Debora Leao, 25, was born in São Paulo. Social entrepreneur and youth advocate, co-founded and today is fully dedicated to the development of Engajamundo, a non-profit youth-led organization that seeks to empower and engage youth in international policymaking processes that could shape our future. With a passion for youth empowerment and building a sustainable future for our world, she has been engaged in nation-wide networks dedicated to promoting social entrepreneurship and empowerment of youth in Brazil from her early years of university. Began to get engaged in UN processes in 2012, as co-founder of the University Committee for Rio+20 in São Paulo, an outreach project to engage and mobilize students of the city in the environmental debates taking place in the context of the conference. As part of the executive board of Engajamundo, she has worked as Communications Coordinator for the past two years. She has also taken roles in different advocacy, lobbying and outreach activities of the organization, especially those related to the UN Commission on the Status of Women (CSW) and Habitat III. Through her work in the latter, she attended the Habitat III Prep Com 2 and has recently been elected Deputy Organizing Partner of the Habitat III Working Group of the UN Major Group on Children and Youth. Was also a part of the Brazilian delegation to the Mercosul Social Summit in 2014. Previous to her work in Engajamundo, she worked as consultant at the British Consulate in São Paulo and as advisor at the Brazil Permanent Mission to the UN, in NYC.