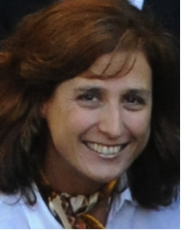 Anacláudia Rossbach from São Paulo, Brazil is Master in Political Economics and despite starting her professional life as an external auditor, she has being working in the last 15 years in the housing field, as a researcher, public sector staff, non-governmental organization founder, external advisor for governments, taking assignments for the World Bank, universities and non-profit think tanks. She worked most part of her professional life in Brazil, but also participated in a diverse and large number of international endeavours, projects, knowledge exchange activities, conferences, etc. During her professional life, she had the opportunity to provide support and advice for key stakeholders from the urban sector from Brazil and also from a broad range of countries, such as the Philippines, China, India, Bangladesh, Sri Lanka, South Africa, Mozambique, Angola, Egypt, Namibia, Bolivia and Peru. She is a co-founder of the Slum Dwellers International – SDI affiliated in Brazil, Interação and held the position of Executive Director for 10 years, supporting community organization in slums from São Paulo and Recife, furthermore she also supported its expansion to Bolivia and the founding of the local affiliated in this country. She worked as consultant for World Bank on housing and metropolitan governance, through technical assistance and knowledge products. At the national level in Brazil she worked closely to the Ministry of Cities (2005 – 13) advising and actively participating on historic and major reforms of the housing sector in the country, which the Growth Acceleration Program (slum upgrading), the subsidies program "My House, My Life" and the National Housing Plan, including contributing to the overall programmatic and regulatory framework of these programmes and capacity building initiatives through long distance learning modalities. In Brazil, she also supported the State Government of Rio on stablishing a new governance management for the metropolitan area of Rio de Janeiro and policy papers to support the long term vision plan São Paulo 2040. Additionally, as a consultant for the World Bank she was part of a technical assistance team on low income housing and slum upgrading for policy reforms in the Philippines during the period of 2012-14. In 2014 she was appointed as the Cities Alliance Regional Advisor for the Latin America and Caribbean, where she is now responsible for designing the organization’s strategy for the region as well as to manage projects and partnership. Recently she was invited by the Habitat III Secretariat to integrate Policy Unit 3, on National Urban Policies where she is actively engaged.