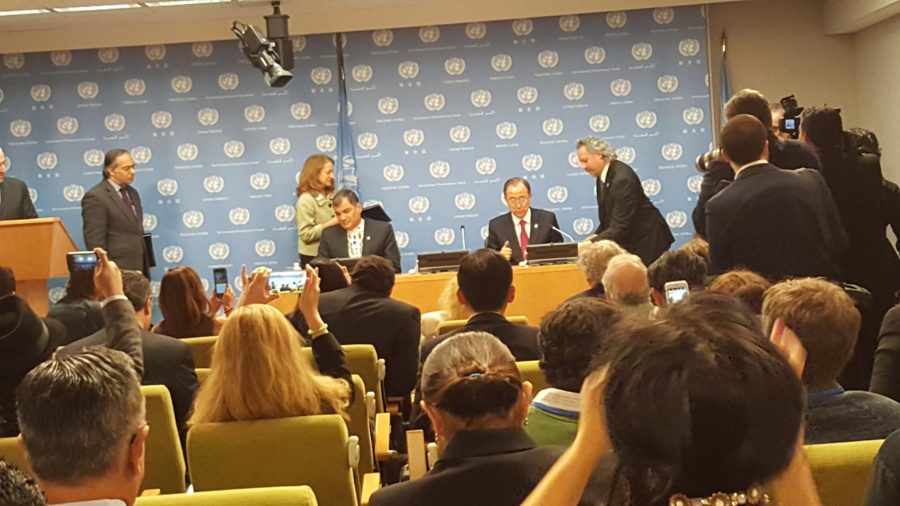 United Nations Secretary-General Ban Ki-moon and Ecuador Constitutional President Rafael Correa signed a joint letter inviting heads of state and government to participate at the Habitat III Conference that will be held in Quito, Ecuador, this October.

Both leaders highlighted the significance of the Habitat III process and the historic opportunity it offers to change the way we think about cities and how we build, plan, and manage them in a more equitable, sustainable, and resilient way.

“We Live in the Urban Century”

After signing the letter of invitation, Secretary-General Ban Ki-moon gave a few remarks, noting that Habitat III is taking place during the critical first year of implementing the 2030 Agenda for Sustainable Development and how important will be for the New Urban Agenda to chart a clear path towards achieving a sustainable world.

“We live in the urban century. More than half the global population lives in urban areas. When planned, built, and governed well, cities can be massive agents of positive change. They can be catalysts for inclusion and powerhouses of equitable economic growth. They can help us protect the environment and limit climate change. That is why we need a new vision for urbanization – a New Urban Agenda.”

He also acknowledged the work being done in preparation for the conference, specifically thanking Ms. Maria de los Angeles Duarte, Ecuador’s Minister of Urban Development and Housing, and Dr. Joan Clos, Secretary-General of the Conference, for their leadership in the preparatory process towards Habitat III.

The Secretary-General concluded his remarks by expressing confidence in the capacity of Habitat III to deliver the impetus for sustainable development the world needs, and that he looks forward to its success in October.

Changing the Way We Live in Cities

Following the Secretary-General, President Correa also shared insights, underscoring the need to seek new alternatives and new solutions to how we live in cities, and how business-as-usual is not sustainable over the long term and can have serious repercussions on the planet.

He drew on the importance of a paradigm shift in order for people of diverse needs and cultures to live harmoniously together in cities, and for that harmony to extend as well between people and environment.

“We need to search…ways in which we can guarantee the rights which should be available in cities, basic services, sustainability of urban development, respect for the rights of nature. Ecuador, in its very constitution, is the first country in history and the only one thus far to grant direct rights to nature, to the natural environment.”

“We need cities that provide opportunities for all. We need to commit to poverty eradication—that needs to be part of our urban planning. We need to foster social inclusion and good relations with rural societies to insure food security and agricultural development so that we can strike that necessary balance between urban development and the protection of the rights of the natural environment.”

Habitat III as a Milestone in Sustainable Development

It will be the first time the Habitat Conference is held in the Global South. Latin America and the Caribbean is the most urbanized region in the world with over 80% of its population residing in urban areas.

The New Urban Agenda, the resulting document of Habitat III, endeavors to be focused, forward-looking, action-oriented, implementable, and measurable. As October nears, activities and engagement leading to the conference continue with a steadily rising momentum, giving the world much to look forward to with regard to the future of its cities, and how that future will be secured in the next 20 years.