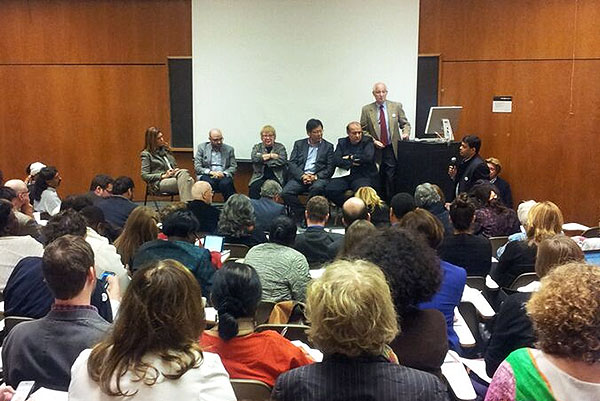 With a remarkable show of participation and open discussion, the General Assembly of Partners for Habitat III (GAP) held its Executive Committee Meeting and General Meeting on the 1st and the 2nd of October 2015, respectively, in New York City.

On October 1, the GAP Executive Committee, consisting of the PCG chairs and co-chairs, GAP president and vice president, met at the Ford Foundation. They finalized the PCG Chair Handbook, and Terms of Reference for the Executive Committee. They received a report from the World Urban Campaign Secretariat on the progress of the 29 Urban Thinkers Campuses (UTC) now being held around the world. Each UTC will contribute findings to GAP for incorporation in the GAP’s final report.

The following day, more than 100 GAP members and a number of observers attended the General GAP Meeting held at the New School. The meeting began with greetings from Dr. Joan Clos, Habitat III Secretary General. Ana B. Moreno, Habitat III Secretariat Coordinator, provided an update on the Habitat III preparations. Two plenary sessions followed with speakers reviewing the implications of the recently adopted Framework for Post 2015 Development and the associated Sustainable Development Goals (SDGs) with special attention to Goal 11 that is directly related to cities and sustainable urban development; reports from recent meetings including those convened by the Huairou Commissison, Communitas, SDSN and the Global Task Force of Local and Regional Governments for Post-2015 Development Agenda towards Habitat III; and linkages to such other upcoming events as COP21 and the World Humanitarian Summit. Identifying the opportunities and mechanisms for stakeholder contributions to the New Urban Agenda, the outcome document of the Habitat III Conference, took front stage at the GAP proceedings when the PCGs met separately in breakout groups in two separate working sessions. Each group developed a work plan and communications platform to maintain momentum between meetings.

Three more meetings are on the GAP schedule. They will be held in different regions of the world in conjunction with the Habitat III Meetings and the PrepCom3 to maximize opportunities for participation. They are: March 2016 (Prague), July 2016 (Surabaya) and October 2016 (Quito).