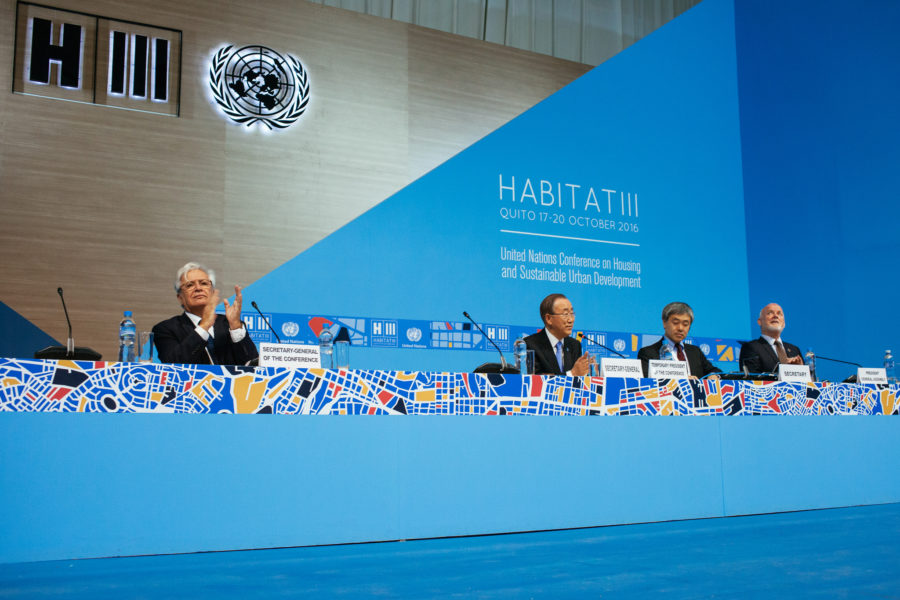 Making the New Urban Agenda a cornerstone of a participatory, integrated and successful tool for sustainable urban development is the core message sent out by the Opening Plenary of Habitat III, the United Nations Conference on Housing and Sustainable Urban Development.

“Cities and towns have an immense role to play in ending poverty and building inclusive societies that promote participation by all,” said Ban Ki-moon. The call for a strong, shared ownership of the New Urban Agenda, seen as “an ambitious and important framework” by Ban Ki-moon, is a further invitation to build new partnerships among different levels of governance to promote urban sustainable development in a concrete way. “It is clear that transforming our world for the better means transforming our towns and cities,” said Ban Ki-moon in the Opening Session, “that means better urban governance, planning and design. It also means more investment in adequate and affordable housing, quality infrastructure and basic services. And it means engaging women and girls in making towns and cities safer and more productive for all.”

The promotion of equitable, accessible and inclusive cities was also recognized by the President of Ecuador Rafael Correa as the main objective of the New Urban Agenda, launched in Quito, which he defined as “the heart of the world,” where change is taking place. The creation of resilient cities, according to Correa, able to conquer the challenges of our era, starts with the definition of the responsibilities of the public and private sectors, as well as other stakeholders and residents.

“The New Urban Agenda is a vision for a better and greener urban future where everybody has access to the benefits of urbanization – A vision where all persons are able to enjoy equal rights and fundamental freedoms, including gender equality, guided by the principles of the Charter of the United Nations and grounded in the Universal Human Rights” said Dr. Joan Clos, Habitat III Secretary General.

“Leaving no one behind” is a priority shared by the Member States, with a strong commitment towards the creation of basic services and the promotion of better urban planning in order to reduce, over the medium and long term, the number of urban dwellers still living in slums or informal settlements.