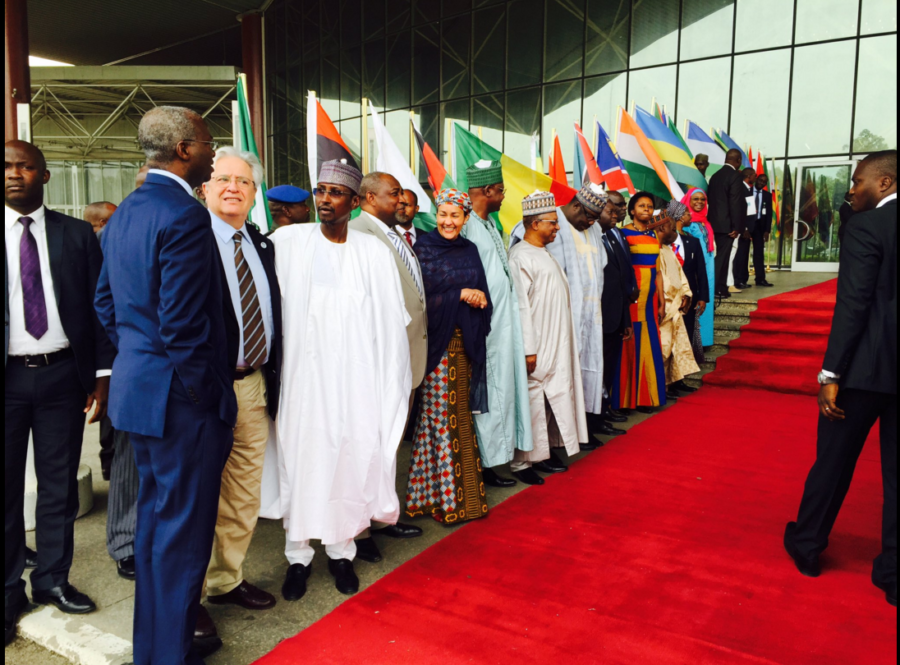 The three-day Habitat III Africa Regional Meeting opened today in the city of Abuja, Nigeria, with a remarkable turnout from national governments, local authorities, civil society, international organizations, and other relevant stakeholders from the region and beyond.

Because population growth and patterns of urbanization differ from one region to another, often with significant variations between nations and cities within each region, it becomes imperative that priorities and solutions are identified to fit regional contexts. For example, population growth in Africa is identified as one the highest globally, with the continent’s population projected to increase from approximately 1 billion today to approximately 2 billion by 2040. This notable growth in the total population in Africa will also translate into an increase in the rate of urbanization, with urban dwellers projected to increase from 40% in 2010 (400 million) to 50% (roughly 1 billion) by 2035.

His Excellency Mustapha Baba Shehuri, the Nigerian Minister of State for Power, Works and Housing, opened the meeting with a welcoming of official delegations and other participants who gathered in Abuja to discuss the regional priorities to be taken into account in the road to Habitat III Conference, which is scheduled to occur in Quito, Ecuador, in October 2016. ¨Habitat III is expected to take a critical look at the Habitat Agenda, which was fashioned under Habitat II process and its shortcomings so as to address African concerns and priorities¨, Minister Baba Shehuri said.

Mr. Jean-Pierre Elong Mbassi, Secretary General of United Cities and Local Governments (UCLG) of Africa, emphasized the role of local authorities in the march towards sustainable urban development in Africa. The role of local authorities is an area that is stressed often within the preparatory process of the Habitat III Conference, and the Africa Regional Meeting was another case were this aspect was recognized and is expected to be included in the final declaration that will result from the three day meeting in the Nigerian capital.

Special consideration was given to investments in urban infrastructure, public health and nutrition, water and sanitation, education, vocational training and skills development. Mr Kumaresh Misra, Deputy Secretary General of Habitat III, stressed that African countries can capture various benefits and opportunities associated with rapid urbanization, whether they are general or region-specific, it is equally essential that current and future challenges are also identified in order to be properly addressed. Changing demographics, limited urban industries, infrastructure needs, environmental degradation, and climate change are some of the main areas that require solutions for a sustainable urban future in Africa.

In the beginning of the event, participants of the conference stood in silence for one minute in honour of late Minister Gata Ngolulou from Chad, as a sign of respect to his person and his commitment to sustainable urban development.

The first day of the meeting was also the time of the Urban Journalism Academy. Tens of journalists attend the workshop to learn and exchange media initiatives that promote urban solutions through stories.

The Habitat III Africa Regional Meeting will conclude on 26 February, and it includes various side events featuring grassroots organizations, women movements, youth organizations and others from civil society and the private sector. The Abuja Declaration is expected to be a vital official contribution to the Habitat III preparatory process due to the significance of the African continent in terms development and because of its growing role in the global economy.