The Campaign was mainly local, based in Ecuador, but with a global impact: while most of the advocacy initiatives were implemented in the host city, Quito, they also involved international stakeholders and participants. 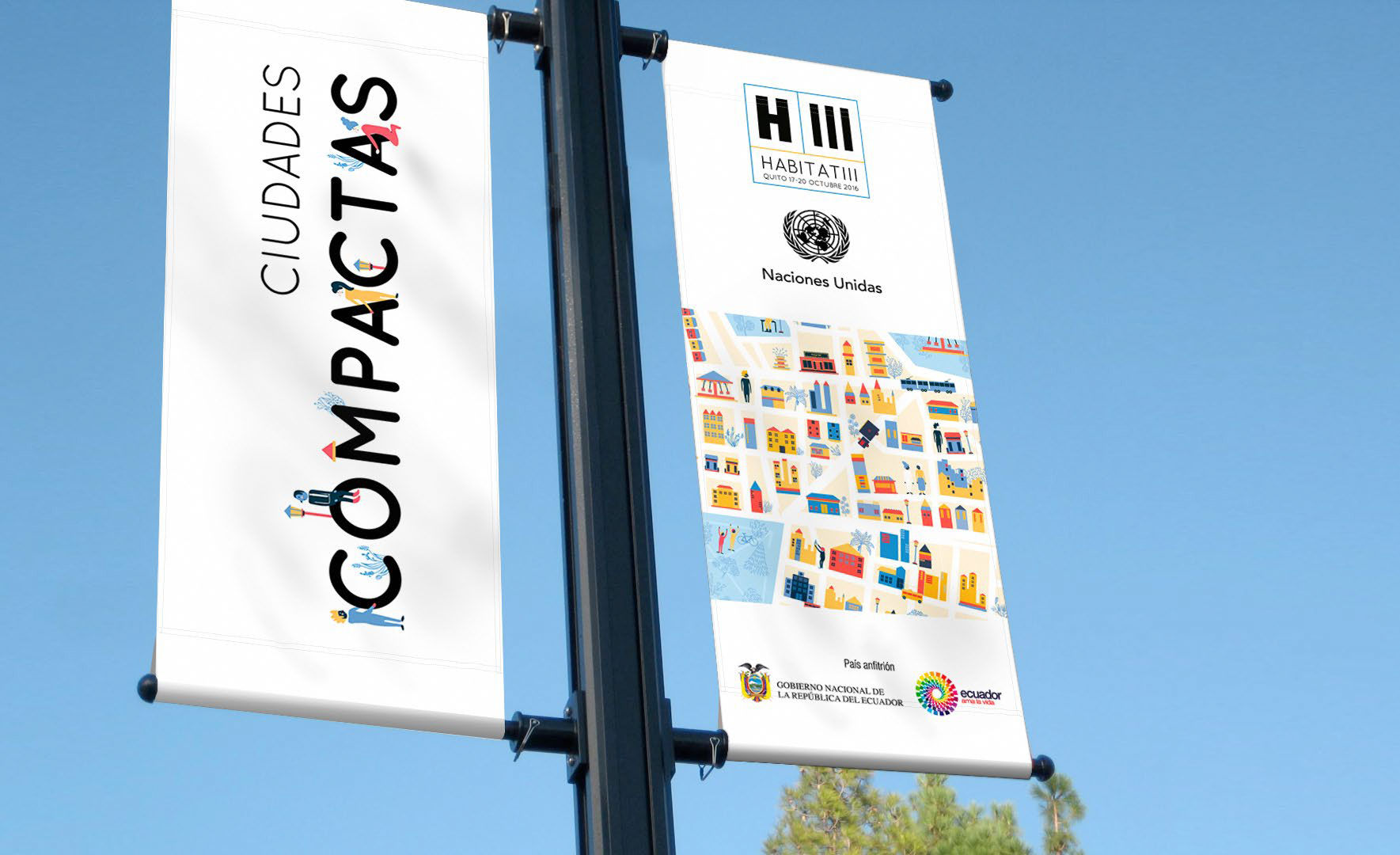 Originally conceived as a campaign with an independent logo and website, the strategy was then revised to make it more consistent with the Habitat III official visual identity to avoid duplicating communication tools, keeping a strong visual and narrative impact and focus on the New Urban Agenda contents.

The visual identity of the campaign was based on an illustration that was key to identifying and connecting the different Habitat III elements and communications tools. The illustration used was conceptualized based on the evolution of the official Habitat III visual asset: city patterns. Quito’s city pattern was enriched with illustration of urban life based on the New Urban Agenda principles. The pattern merged meanings from Andean symbols and current aesthetics of the city. This illustration was at the base of most designs and as single elements extracted from the pattern.

The fonts were the same as that of the Habitat III institutional visual identity (Quicksand, Helvetica Neue Ltd).

See the publication on the Habitat III Visual Identity here .

The main goals of the campaign were:

To mobilize participants to Quito in October 2016. The target was 30,000 participants; 15,000 of whom were international participants.

To advocate for the New Urban Agenda.

To engage, contribute, and gather commitment to the Habitat III process.

In order to meet the campaign goals, its content was made up of six concepts considered strategic to communicate the spirit of the New Urban Agenda and its narrative. Those concepts were communicated as slogans, dedicated visual tools, linked to three sub-concepts each, and to extended explanations. The six concepts were communicated in press advertisements, social media materials, and different city branding tools, generating buzz over certain key words and concepts.

A city in which all citizens of present and future generations can freely enjoy all the physical, political, and social spaces without discrimination of any kind, and have access to adequate housing and public goods and services. In Habitat III, we decide the future of cities together.

A city able to resist and recover quickly from human, social, and environmental risks, minimizing the impact and the vulnerability of the citizens to disasters. In Habitat III, we decide the future of cities together.

A city that promotes free participation of all its citizens, generating inclusivity and a sense of belonging and enhancing social cohesion and cultural interactions fundamental of plural and multicultural societies. In Habitat III, we decide the future of cities together.

A city without borders for its citizens, where the public spaces are the key elements of plural and peaceful communities, avoiding stigmatizing social groups. In Habitat III, we decide the future of cities together.

A city planned to promote the mixed and public use of the land, using the spaces inside the urban limits and fostering collective mobility. Urban density prevents the creation of suburbs improving the quality of life of citizens. In Habitat III, we decide the future of cities together.

A city that plans its environmental, social, and economic future through innovative solutions that generates both prosperity and respect for natural resources. In Habitat III, we decide the future of cities together.

The campaign in numbers

During the Habitat III Conference

During the Conference, within the Conference venue as well as in different places throughout Quito, branding strongly focused on the Habitat III Citizens campaign, but two key projects gave life to the campaign inside and outside the venue: